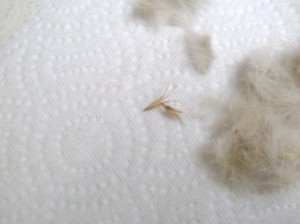 Cheat grass season is in full stride at the veterinary hospital. Unfortunately for dogs it becomes a common part of our day at the as the wicked seeds penetrate between toes, invade ears, creep under eyelids, make armpits, groins and mats miserable, enter assorted unmentionables male and female and generally make them and us miserable. (Us and them?). I have even seen it slip into the tear duct of a large dog as well as a freaky incident where it INVADED THE BRAIN. 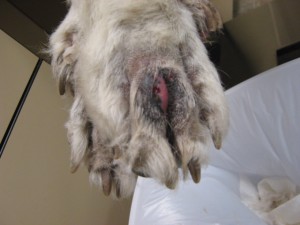 If there is red swelling between the toes, a sudden swollen watery eye or any orifice that is suddenly the subject of discharge and much licking, cheat grass can be the culprit.

Cheat grass is an annual grass that comes back every year from incredible amounts of seed. It is not native but came from the grasslands of eastern Europe and Asia. It is called cheat grass because cattle think it is great food until it all of a sudden dries up in June (where I grew up we call it June grass). It eventually becomes inedible and can even pack up seeds under the tongues of livestock. It causes so much trouble because each seed has long flexible barbs that sweep backwards causing it to burrow forward like a porcupine quill (you’ve had it in your socks, right?). It is not to be confused with foxtail or barleygrass (which can also be annoying) that stays green longer. Cheat grass is nature’s way of thumbing a nose at us–limited food value, very invasive, very annoying and very hard to get rid of.

The best way to deal with cheat grass is to avoid it, though that can be impossible. Longer-haired dogs should have the hair between the toes clipped to bare skin. With many dogs clipping the hair around and under the ears the same way is a good idea (also airs out the ears for those with chronic ear problems). Some heavy coated dogs should at least be shaved underneath and mats should always be clipped away for summer. An especially bad scenario is mats then cheat grass then infection then MAGGOTS. We see it every summer!!

Controlling cheat grass outside is a lot of work. Mowing it just as it heads out can control the seed though this summer the rain let it grow back and seed again. Planting other grasses and watering it consistently allows the cheat to be crowded out. You’ll never see it in well-irrigated lawn and pastures and it can’t get started there.